FCA recorded their third win in four preseason friendlies. The Fuggerstädter ran out 4-1 winners in a 120 minute game against Türkgücü München. The third-tier side took the lead, but FCA turned things around in the closing stages.

With Rafał Gikiewicz in goal, Tobias Strobl made his debut in Augsburg colours, the new signing from Gladbach also wearing the captain’s armband. This time, Michael Gregoritsch started up front.

FCA needed a little time under the hot sun to get into the game. One step at a time, they started to find their rhythm and moved the ball around nicely, but the attack was lacking in urgency. On the rare occasion that FCA had a sight at goal, the finish was not accurate enough. Morávek’s header (14’) and Gregoritsch’s shot (21’) both cleared the bar by a similar distance..

In the 20th minute, Daniele Gabriele got the first shot on FCA’s goal away – his attempt only clearing the crossbar by a fraction. Augsburg’s best chance in the first half fell to Gregortisch, who failed to connect properly with his shot from a promising position (30’).

After half an hour, head coach Heiko Herrlich brought on Mads Pedersen for Tobias Strobl, who has been struggling with the consequences of a muscle bundle tear. This substitution saw FCA reshuffle into a 3-5-2 formation. Pedersen took over on the left flank, Iago moved back into the back three and Fredrik Jensen joined the attack. As for the action on the pitch, there were very few changes – FCA had more of the game, but couldn’t create any real danger going forward. 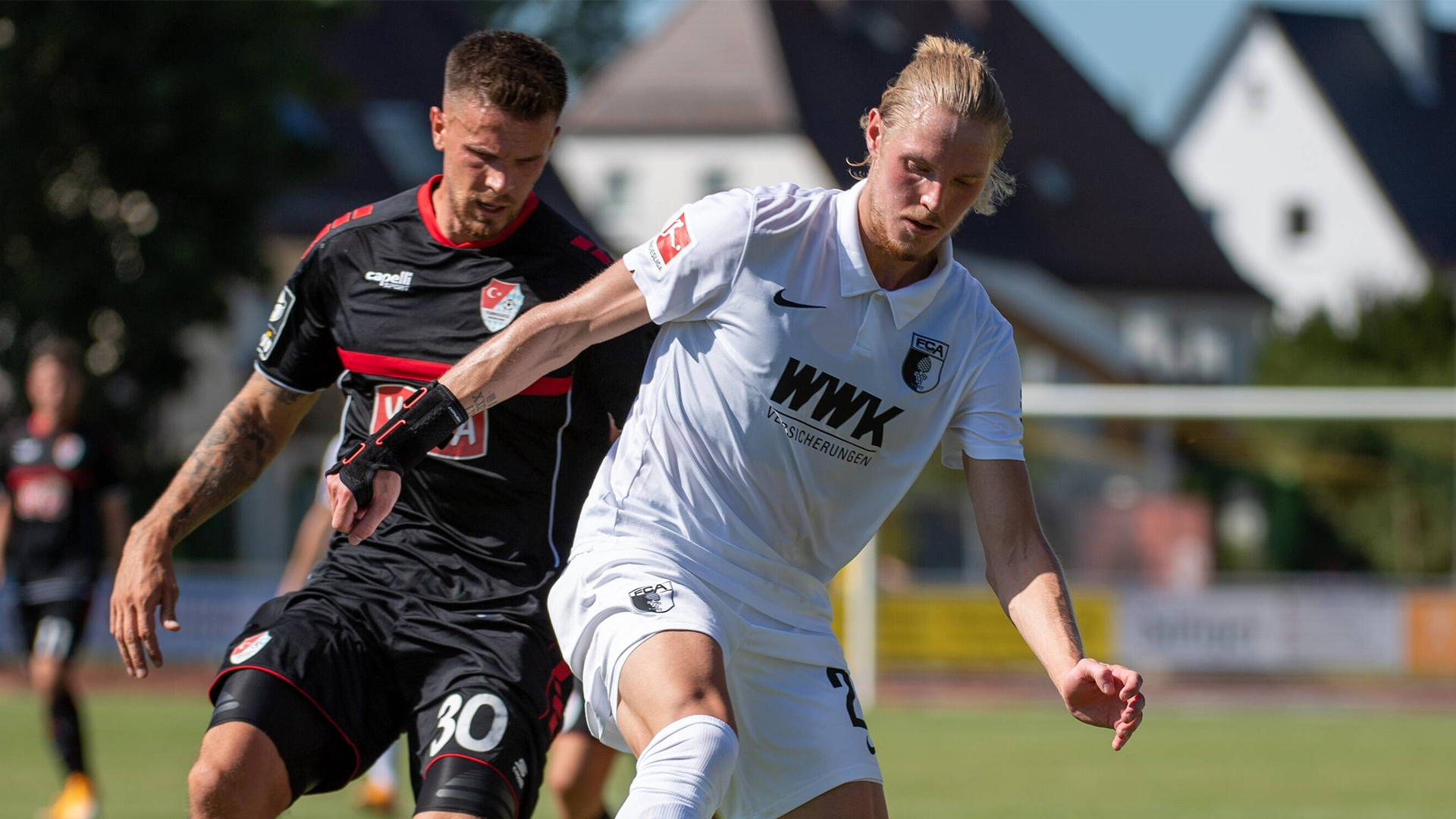 With almost an hour played, Gregoritsch combined well with André Hahn before properly testing Türkgücü’s goalkeeper René Vollath. Seconds later, Tim Civeja’s shot zipped just wide of the far post. Out of nothing, the third-tier side then went right up the other end and took the lead. Sercan Sarerer was played into space at the edge of the area before burying the ball clinically into the near corner (59’).

Finnbogason misses from the spot

There was a whole new XI for the start of the third quarter, but the team stuck with the 3-5-2 formation. Rani Khedira played in the centre oft he back three, Daniel Caligiuri took over at right wing-back and the new striker partnership was Alfred Finnbogason and Florian Niederlechner. Augsburg began to play with more urgency, and Vargas soon fired an early warning shot (65’). At the other end Tomáš Koubek was called into action for the first time when Furkan Kircicek found himself one-on-one with the goalkeeper. Koubek did well to deny the opponents a second goal (69’).

But it was FCA who found another gear. Türkgücü’s Michael Zant tested his own goalkeeper Maximlian Engl (72’), and it wasn’t long before the Munich side’s keeper was the centre of attention again. After a nicely-worked Augsburg counterattack Engl was only able to stop Finnbogason by foul means. The man from Iceland took responsibility for the resulting penalty, but shot straight at Engl from twelve yards (75’). 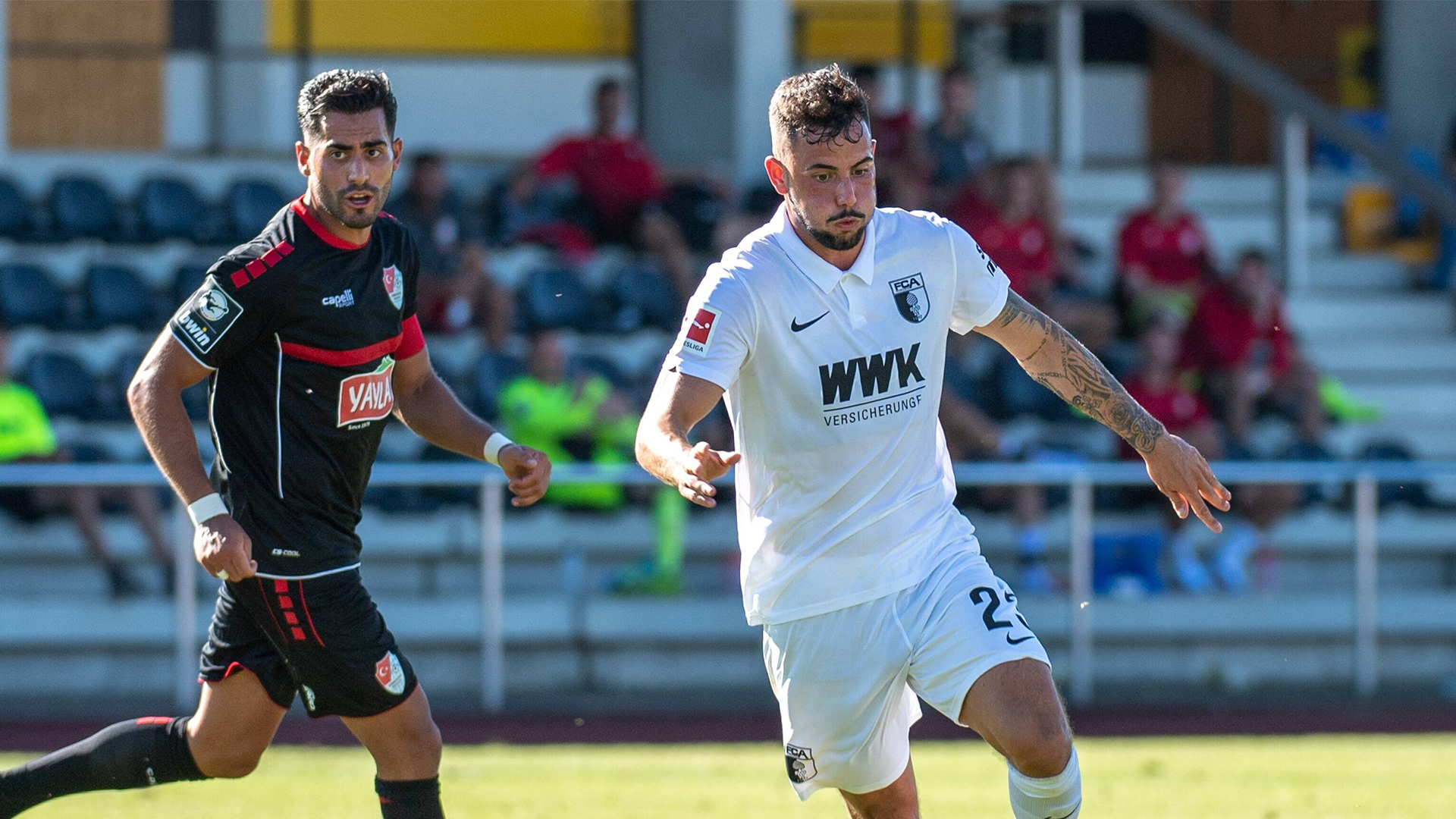 But the Augsburg players were not deterred by the missed penalty, pressing their foot to the floor in search of goals. FCA created great opportunities seemingly every minute, but lacked the finishing touch to put the ball in the net. Richter hit an effort against the post (79’), Niederlechner shot at Engl (82’) and Jeffrey Gouweleeuw connected with a header but could only send the ball over the crossbar (84’).

For the last half-hour Herrlich switched back to a back four, with Khedira moving into midfield. Barely a minute after the restart, Augsburg were level through Niederlechner, as the striker volleyed a cross from Richter into the top corner (91’). FCA were in control and all set to turn the game on its head. Richter and Max’s attempts in the 92nd and 94th minutes respectively were both inches from finding the back of the net, before Niederlechner was thwarted in the one-on-one. Back at  the other end, the Fuggerstädters rode their luck as a header from Emre Güral struck the post (96’).

With just over 100 minutes on the clock, FCA finally rewarded themselves for their efforts. Richter lifted the ball into the middle, where Felix Uduokhai leapt forward to head in for 2-1. Augsburg had the lead, but didn’t stop there: After providing the assist for the second goal, it was Richter again who played a big role in the third. His delightful ball over the top to Finnbogason was squared by the Iceland international for Niederlechner, who tapped the ball home from close range. 3-1 (112’). In the 118th minute, Florian Niederlechner completed his hat-trick with a volley from the edge of the box. Game, set and match. 4-1 the final score.